Usually, when I decide it’s time to zark a computer to death, it’s my Linux box that bears the brunt of my incompetence. Last week, though, I booted into Windows to check out an image I wanted to work on, and discovered that I was unable to hook up to the Internet through Windows 2000. I tweaked this, fiddled with that, and finally decided that what I needed to do was uninstall and reinstall the TCP/IP protocol that my computer needs to connect. No problem. Click on the protocol. Click on "uninstall". Click OK. It takes its time, and then tells you that you need to reboot the machine. No problem there. You reboot, and then you go back into Network Settings to reinstall the protocol from its nice little cache on the hard drive. No problem, right?

This is a problem. I don’t happen to have that disk right now. It’s with my brother-in-law, who lives out in Napa, quite a ways away from here. Not an impossible distance, but longer than a casual daytime drive.

All in all, it’s a bad thing. I haven’t been able to get on-line from Windows for over a week now. Not that I miss it, of course; I’ve been working in Linux pretty solidly for about a month now, and I’m getting very used to it. In many ways, I like it much better than Windows. But that’s a hobbyist thing, really; it’s like the difference between the guy who wants to drive his car from one end of town to another versus the guy who wants to tweak his engine, adjusting a gap here and tweaking a valve there and fiddling with an intake valve under that camshaft (or wherever you’d find an intake valve). Okay, his car probably isn’t as pretty, but he’s got a lot more faith in it, because he is pretty much responsible for it himself… and if it explodes, he knows who’s to blame. And I like how much I can customize Linux; just for fun, I’ve been playing with some screen capture software, and I made a snapshot of my desktop, which I’ve placed below. It’s based on H. P. Lovecraft, of course, since I’m still on that HPL kick; any day now, Evilpheemy, "Incident at Mount Joyce" will be finished and we’ll be ready to start playtesting Outer Darkness.

With Linux, I feel like I get more out of my computer, and I understand it better.

But meanwhile, I frequently stay up until the wee hours playing with my computer, adjusting this and tweaking that, and generally enjoying the heck out of myself. Jennifer doesn’t seem to mind that I typically end up sneaking into bed at 2:00 or so, still too wired to sleep. That’s reason number one: that she puts up with my weird hobby.

Jennifer likes to cook, and that’s reason number two. She likes to cook good food, and she does a very good job of it. She came home earlier this week with a quick-and-dirty recipe for green beans that involves garlic and soy sauce, and we’ve had that twice this week with dinner; tonight, we had it with this amazing lasagne that she makes, which involves some vegetables so cleverly chopped up that the texture almost makes you swear you’re not eating vegetarian lasagne. Jennifer likes finding recipes like that and bringing them home and preparing them, especially if they’re quick and easy. She’s got a knack for it; I call it her "Bean Trick", in honor of the bean recipe and our linguistic obsession with bean words in our house.

I get easily bored at times, and this can sometimes take odd manifestations. A couple of weeks ago, while heading off to the University to work in the lab a bit, I decided that I was bored with going left, then right, then left and down to the highway. And so instead of taking that second left, I went straight, and found myself being forced to take another left; then I took a right, just for the heck of it. Then I found myself taking a right. And so on.

The back roads of Solano and Yolo Counties are amazing. There are acres and acres of farmland, of course, but there are also wetlands and grasslands, bird sanctuaries, marvelous old Victorian style houses, and an abandoned church with an old graveyard that someone has moved their modern double-wide trailer onto; naturally, it’s that last bit that caught my attention the most. There is also a large damp field near one farm where an egret has taken up residence. The first time I drove past it, I took our digital camera and tried to get a picture of the egret; unfortunately, it was way too far away from the edge of the road, and the photograph shows nothing but this tiny white speck in a sea of light brown grass and mud. I erased the picture from the camera. Unfortunately, the back roads are a bit inconstant, it seems, and I haven’t been able to find that bit of marshland again.

The upshot, though, is that I’ve been able to find at least two routes Davis from Dixon that stay far away from I-80. I doubt that either route saves any time except during the heaviest rush hours on I-80, but there’s still something rewarding about speeding down a farm road which is barely wide enough for your car, let alone your car and the tractor that’s pulling a wagonload of hay. With the windows down and the soudtrack to O Brother, Where Art Thou? blaring loudly.

We’ve had weird car karma over the past couple of weeks (more about that some other time), and last night we wound up driving separate cars home from Davis to Dixon. I offered to lead Jennifer along the back roads so that she could see what I’d discovered. She probably wanted to get home sooner than that would have entailed, but she was a good sport, and we drove those roads. Bear in mind, that was the first time I’d driven that route in the dark; I almost got lost a couple of times, but managed to get us home safely. Jennifer puts up with weird stuff like that from me, and that’s the third reason.

There are two more reasons, but I won’t detail them here: just think about wholesome implications of the phrases "love monkey" and "gum drop bear", remind yourself that today was Valentine’s Day… and that’s all you need to know. It was clean.

And if I were the silly sentimental fool that I have been known to be in the past, I’d have spent this entire entry talking about how much I love Jennifer and making you, my one or two constant readers, a bit sick; but instead I wanted to share at least three ways in which Jennifer has made my life so much more interesting and exciting than it ever was before, by giving me space to do random things in, and participating in some of them with me. This whole marriage has been a complete life upgrade for me. In a way, it’s almost like the difference between Windows and Linux for me; with Jennifer around, I just feel like I understand things better and get more out of life.

And just for the heck of it, here is the snapshot of my computer’s desktop: 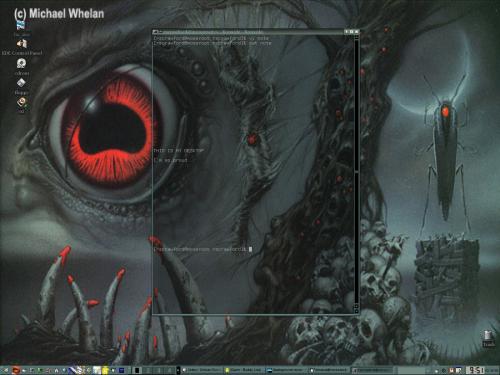 Perhaps not all that exciting, I guess. And it looks quite a lot like Windows in some ways. But trust me, it’s a big change.

This site uses Akismet to reduce spam. Learn how your comment data is processed.

Random books from the Crawford library