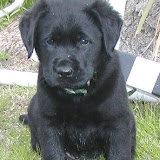 Winston Churchill’s “black dog” was the name he gave to the depression he suffered throughout his life. I like the metaphor. It implies something that follows him around, barking at him and nipping at his heels; yet at the same time it’s something he can master and take control of, because, well, it’s a dog.

So, I’ve decided that I need a metaphor for my own depression, something scary — because depression is scary, after all — yet kind of goofy, because I need to be able to mock it every now and then. Right now I’m thinking an ogre: specifically Sir Reynold’s Ogre, from my story “Sir Reynold Fights Another Ogre” (Story of the Week #11). Even though the ogre is powerful and scary to Sir Reynold, he eventually defeats it and moves on with his quest.

Or maybe not, because that story’s kind of weird. (Hard to believe, I know, but I have written a couple of strange little stories.)

So. I’m open to suggestions as I ponder metaphors to use for my own depression. Right now I don’t really need hints on how to deal with it; I just want to come up with a goofy metaphor that will help me characterize my depression and stomp on it when I need to.

This site uses Akismet to reduce spam. Learn how your comment data is processed.