This week has been a wet one. Monday there was hail from hell — seriously, it hailed for something like fifteen minutes. Usually when we get hail in this part of the world, we get a few pea-sized ice chunks for five minutes or so. This time, the world outside looked like an Alaskan city. Here’s a picture I took from our office window of the parking garage across the street and the corner:

The rest of the week has been pretty wet as well, but nothing like Monday’s event. It’s good, because California may be on the verge of another drought, and we need all the water we can get.

On another note, next weekend is FogCon 2018. FogCon is a small convention that Jennifer and I have been attending for the past few years. It’s fun. This year, I’m actually on a panel! My second convention panel ever! The panel is called “Cuddly Horrors from Outer Space!” The description is as follows:

“Harlan Ellison wrote about how the classic monsters of horror film and story have been de-fanged (so to speak) — the werewolf, the vampire, and so forth. You can now buy a plush Cthulhu from any one of a number of sources, read cartoons about baby extradimensional horrors, and so forth. Can Cthulhu and the rest be saved from being not-scary due to cuddliness? And if so, how?”

If you’re going to FogCon and want to go to the panel, it’s Saturday at 8 pm in the Sacramento Room of the con hotel.

I think I got on to the panel on the basis of this post, where I wrote about cosmic horror and Cthulhu. I like to think I know something about the topic. I’ve been in touch with the other members of the panel, and it’s going to be an interesting discussion, I think.

It will be defined in the antepenultimate paragraph of this blog entry. And this word has probably displaced defenestrate (which, of course, means to throw someone or something out of a window) as my favorite word.

Today, this blog entry is just about some snippets that happen to be floating in my brain. For example: In my opinion, the Terminator franchise ended with Terminator 2: Judgement Day.

There was no need for any other films after that one. It wrapped up all the various threads and plot points and so on, and presented us with a nice clean storyline that worked on plenty of levels. It was a solid action story, but it also had depth of theme and characterization. The rest of the movies are just schlock cashing in on the name of the franchise.

That said, I did really enjoy the Terminator TV series: Terminator: The Sarah Connor Chronicles.That show was well-written and executed, and deftly played with themes of time travel, family, and so on. It’s a shame that the WGA strike in 2007/2008 (am I right about the dates?) killed the show before it really got a chance to get going.

Same with the Alien franchise. Alien was a solid horror movie; Aliens was a solid action movie. Both are fine films. The rest of the films in the series are junk. Even Prometheus, which, I admit, was beautiful to watch, especially in 3D. I haven’t even bothered watching Alien: Covenant, though I might if it ends up free on Amazon Prime or Netflix. This video here demonstrates precisely why Prometheus was such an awful film:

Not all movies have to have thematic depth or solid characterizations to be good fun, of course. The 2014 Godzilla film was pretty much nothing but an action movie featuring giant monsters duking it out over the Bay Area. Characterization was kept to a minimum. It didn’t really hit the right thematic notes that the 1954 Gojira film had; that film was more about the US atomic attacks on Japan than about the monster itself. I enjoyed the 2014 Godzilla but I struggled with its purpose beyond the aforementioned monsters slugging it out.

The next American Godzilla film, Godzilla: King of Monsters, is, I believe, set to be released in 2019. Again, it will probably be light on character and theme, but heavy on CGI monsters battling each other.

Antepenultimate means “the third from the last”. As in, this is the third-from-last paragraph of the blog entry. Or, more precisely, “before the penultimate”.

And this entry is the penultimate paragraph; that is to say, second-to-last. I read a novel many years ago by Phillip K. Dick called 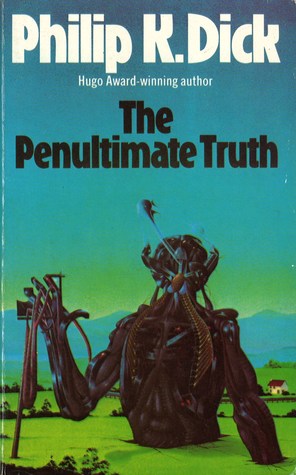 The Penultimate Truth and it, like everything else Dick wrote, it was odd and bizarre and has stuck with me ever since I read it as a freshman at UC Davis. Come to think of it, this might have been one of the books that drove me toward getting a philosophy degree.

And this is the ultimate paragraph; that is to say, the final one. I hoped you enjoyed it.

It looks like I may be able to get my con fix this year after all. On Friday and Saturday, September 26 and 27, there’s a local con called From the Land Beyond, which looks like it will be an awful lot of fun for a local con. It certainly won’t be to the scale of Dragon*Con or ComicCon, of course, but even so, got a pretty decent collection of guests.

From television, they’ve got Erin Gray, who played Colonel Deering in the 1980’s Buck Rogers in the 25th Century television series.

Like every other male geek (and probably quite a few female geeks) who grew up in that decade, I had a huge crush on Erin Gray (of course it would never rival my crush on Kathy Coleman, but that’s a different story). Colonel Deering was sexy, tough, intelligent, and didn’t take crap from anyone. How could I not have a crush on her? I’ve run into her at Dragon*Con and a couple of other places over the years, and she’s just as good looking as she was way back when. I’ve never embarrassed myself in front of her like I did in front of Denise Crosby that one time, but I’ve come close.

They’ve also managed to get Richard Hatch to show up. Hatch, of course, played Apollo in the original Battlestar Galactica series,

and plays Tom Zarek in the new Battlestar Galactica. I’ve seen Hatch a few times over the past few years, and he’s struck me as not just a good actor and a great (and funny speaker), but also a genuinely classy guy to boot.

They’ve also got Michael Berryman, who manages to beat out Lance Henrickson for the title of ugliest character actor. He usually gets cast as mutants and other nasty critters (he was the lead mutant in the Hills Have Eyes movies), which is kind of a shame because I’ve seen him in other roles, and he’s quite talented.

Sadly, looks are everything in Hollywood, and I haven’t seen him in a role that showcases his talents since the season three X-Files episode called “Revelations”.

, which I really enjoyed and which I recommend to just about everyone. They’ve also got some local writers which I’ve never heard of, and that’s okay too. I’ve tried hunting down some of their books, but it’s been pretty difficult for some reason. I fantasize about being a celebrity author at one of these events myself someday, but it might be years and years until that happens, if ever.

Anyway, it’s called “From the Land Beyond”, and it’s being held on the 26th and 27th of September at the Scottish Rite Center in Sacramento, It’s only a couple of miles away from where I live, so I really have no excuse not to attend, do I?

While my heart aches for the loved ones of the poor fellow who lost his life in a seemingly random and undeniably brutal attack, my first thought upon reading this article was, “There can be only one”. Though you’d think the immortals would be more subtle than to behead each other on a Greyhound bus.

(Of course, I mentioned this in another forum the other day, and got a number of virtual stares. “What? What does that mean?” These were people who should have known better. It’s better than when in the early 90’s, before Star Wars had its revival, I said to some kid, “May the Force be with you,” and he said, “What?” I’m too young to be this old.)